Searching for Andrew Hawk in Pennsylvania 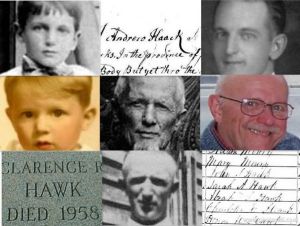 Christena Who? From Where?

Seaborn J. Hawk's 1859 document above was all that I or generations of Georgia-born genealogists before me had to go on in tracing the roots of our shared Hawk lineage. Few things were the source of more consternation that Christena's last name. Indelidge? Indelida? What kind of name is that? Surely Seaborn meant Hampshire County, Virginia, and not New Hampshire! Virginia we could deal with, but the Yankee states? Oh, the letters that went back and forth between Bert Hawk, Hilda Driver Hawk, Gloria Donaldson Wells, Julia Hawk Raines, Carol Rearden Hawk, and myself over the years. We burned up the email pathways and worked our brains sore over that little note.

When DNA results led me to William M. Hawk of Franklin County, Pennsylvania, I discovered that he had been laboring for years to find cousins to his Hawk line. He didn't expect them to be in Georgia any more than I expected them to be in Pennsylvania. When we got over our mutual astonishment, he immediately began searching for our connection among the old Pennsylvania records. Almost all the data on this page is his work.

Christena's surname was Hinterleiter, or Hinterleitner. She was the daughter of Casper Hinterleit(n)er and Maria Maurer. And her line had just been documented in The Hinderliter/Hinterleitner Saga. Moreover, through this book we learned that Casper Hinterleiter's line originated in the village of Haag am Hausruck, Upper Austria. In that region (so says the book) a range of hills and meadows is called a Leiten, and a resident is a Leitner. The Hinterleitners were from the "hinter" range or back range. We can only speculate with contained enthusiasm that our Hawk line originates in the village of Haag in the same area. And what then does 'Haag' mean? It likely means 'hedge' or 'enclosure.' For example, the Dutch city of Den Haag (The Hague) is so named because of the hedges that enclosed hunting grounds for the local nobility.

The DNA connection between Bill and me is undeniable, but all it can tell us is that we share a common Hawk ancestor in the genealogical past. The rest of the picture has to be painted in with records, and the records quickly told us that our connection was through Andrew Haack. Andrew Haack's first name is sometimes recorded as Andreas, and we've seen his surname variously recorded as Haack, Haak, Haag, and Hauk. Andrew Haack Sr. is the way he signed his last will and testament so that is the spelling we use. Andrew Haack was the father of my Andrew Hawk of Georgia and Bill's John Hawk of Pennsylvania.

We have plenty more questions of course. The big one is where Andrew Haack came from. And why did he leave? And when? Maybe the village records of Haag am Hausruck hold a clue?

Here are the records - and again, almost all of this is Bill's great work.

Extracts from "Berks of Old"

"Berks of Old: the History and Genealogy of Berks County, Pennsylvania" (PERSI code PABO) was published by Southwestern Pennsylvania Genealogical Services 1983-1990. There were 7 volumes and 4-5 issues per volume.

Extracts from other PA works

Other records
These are not our lines but help us through the process of elimination.

Return to the home page