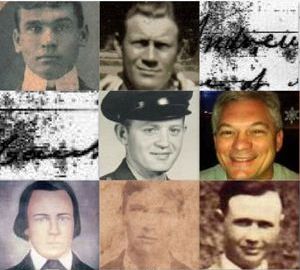 First surprise, 2007 - DNA testing showed our haplogroup to be I1 (2011 ISOGG nomenclature; formerly I1a and I1*), which has its origins in Northern Europe, likely Germany, Denmark, or Scandinavia. With that result, we knew our Hawk progenitor was not an American Indian, putting to rest a pervasive family legend throughout our lines. Our Hawk line was of European descent. Knowing this though really did not prepare me for what came next. I mean, I'm a Southern boy. I like Lynnrd Skynnrd and sweet iced tea. 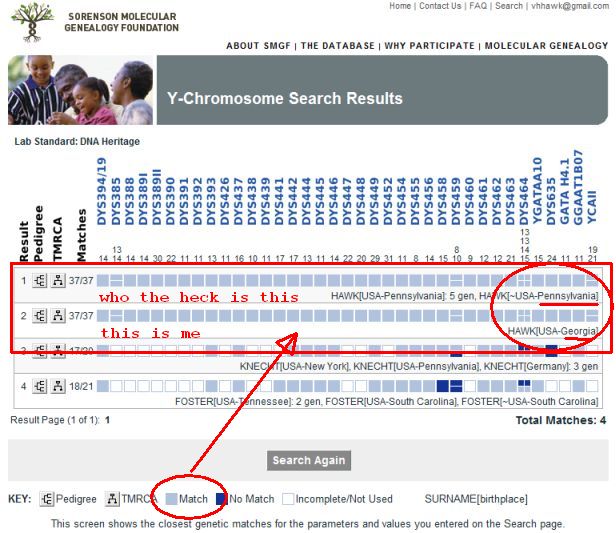 The Sorenson Molecular Genetic Foundation used to collect Y-DNA samples and pedigrees and publish those anonymously in their smgf.org Y-database. As the Hawk Project administrator, I wanted a cheaper test for my project members, and it didn't get any cheaper than free. So I had sent my own spit to SMGF to see if their results could be useful to us. It took over a year, but my results showed up in their database in mid 2007. And I periodically checked that database like I checked all other public access databases, just scrounging for any new matches out of the blue. In October 2007, that's what I got. Not just any old match, but a perfect match, perfectly aligning with my results from the Georgia and Alabama lines.

As a side note, if you look closely, you'll see that Sorenson shows we match at 37/37 markers. However, DNA Heritage uses the same set of markers (DNA Heritage actually subcontracted their testing to Sorenson's labs) and counts them as 43. The reason for the counting discrepancy is that four of these markers are checked at multiple points -- like dropping the needle at three or four points within one song. To make matters more confusing, Family Tree DNA (abbreviated FTDNA) uses a different set of 37 markers, but measures them in the same way DNA Heritage did, that is, markers with multiple STR locations are measured as multiple markers. So while SMGF and DNA Heritage measured the same things but counted them differently, FTDNA actually measures six fewer markers in their 37 marker test. Just one of many reasons I am not a fan of FTDNA, though they are now virtually the only game in town for Y-DNA testing.

The search within the search - Sorenson doesn't provide names or contact information, in fact they don't even let you know when your sample is complete. They're a research lab, not a business. And many of the DNA and pedigree submitters were old folks at family reunions where LDS representatives happened to arrive to take cheek swabs and family histories. So when that perfectly matching Pennsylvania Hawk sample showed up in the SMGF database, I knew there was no assurance that the DNA's owner was alive. If he was alive, was he well? If he was alive and well, was he interested in genealogy? If he was alive and well and was interested in genealogy, did he have a web presence, an email account, some trail of bread crumbs through various genealogy forums that led to his door? And if so, did I have the google-fu to find him? Well, yes, of course.

And the connection - Fortune favored us and luck was with us. The owner of that Pennsylvania DNA was alive and well, was deeply interested in genealogy, and had a significant web presence. And he was, and is, a gentleman and a scholar. William M. Hawk of Franklin County, Pennsylvania traces his ancestry a short ways east to Berks County. If you've ever played Monopoly, you've likely taken a ride on the Reading Railroad. That's the Reading in Berks County, PA. It was in Berks County that Bill had found the earliest records of the Hawk line he believed to be his ancestors. His own years of searching for connections to his Hawk line had been largely fruitless, though there are a few Hawk lines in Pennsylvania, some of which have been very well documented. But the records did not connect him to any of those lines, or to any other Hawk folk anywhere else, for that matter. He had no idea where his folk had gone. Just as we had no idea where our Andrew Hawk had come from. And so DNA leapt the gap in the records for us, energized us, and gave us common cause. Bill's subsequent work has established our common ancestor as Andreas Haack, who in later years wrote his name as Andrew Haack. My Andrew Hawk who farmed near Augusta, Georgia, in 1789, was this man's son. Bill Hawk's ancestor, John Hawk, was the brother of my Andrew Hawk. John stayed in Pennsylvania. Shortly before the American Revolution, Andrew left. We don't know why. We do know he lived for a time in Frederick County, Maryland, thanks to an amazing document Bill discovered in 2008. All of this is on the Pennsylvania and Maryland pages you'll find elsewhere on this site.

The surprises aren't over - What good is genetic genealogy? Good enough to unify the scattered Hawk families of Georgia and Alabama into one family; good enough to reconnect our family to our roots in Pennsylvania; and good enough to begin recovering a bigger and heretofor unsuspected part of our family history. There are no spring chickens in genealogy. Some of us would have gone to our graves without these answers if it were not for a few simple Y-DNA tests. And if my passion for genealogy had only led me thus far, I would have counted myself lucky. Even as I write this four years later I'm smiling about it. But in 2011 we got another surprise. Like the Pennsylvania connection, it was an unexpected bolt from the blue.

Forward to Reconnecting a lost line