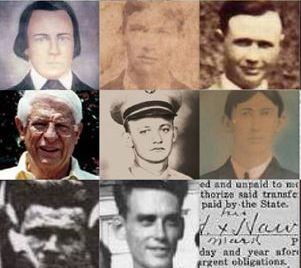 Second surprise, 2011 - We frankly don't know much about the early history of the Andrew Hawk lines in Georgia. Early Georgia research is problematic. Records have been lost to fire and flood and simply being thrown out with the trash, which is how a bunch of Greene County records came to be in the Duke University libraries, but that's another story. The only core document I know is Seaborn's testimony that Andrew Hawk "of the first settling of Augusta, Ga." was his grandfather, that his own father's name was Andrew, and his uncles were William, Peter, and Jacob.

Andrew, Jacob, Peter, William - These four names are the only Hawk names that show up in the earliest Georgia records, all in Wilkes, Greene, and Oglethorpe counties, prior to about 1800. After 1800, other names begin to enter the picture, like the mysterious John Hawk, born 1802. But up to this point the Georgia records are consistent with Seaborn's genealogy. The problems really arise with the Generation 3: the children of Andrew (Jr.), Peter, William, and Jacob. Of these four men, only William's line is believed to be fully understood, and at that only if we accept that the three minor children he left with his widow Rebeckah Hawk nee Whatley (Hillsman, Thurmond, and Nancy Jane) were his only children. The line of Andrew (Jr.) comes next, as Seaborn's occasional journal comments about "Brother Tilman" and "Sister Emily" help to fill in his siblings. Jacob's line may or may not have died childless; his widow Catherine did not mention any children or grandchildren in her will, but the line of Thomas Franklin Hawk has long been thought to be Jacob's. Peter's line is completely unknown and I can't even offer any suppositions on it, despite the fact that he seems to be the oldest of the sons.

In April 2011 we got notification that there was a new 67 marker DNA result matching ours at FamilyTreeDNA. Thanks to the prior work of other genealogists we're now reasonably confident that the founder of our new branch was James M. Hawk, born about 1826 in Georgia. James M. Hawk was in Mississippi as of the first fully enumerated census in 1850, had moved to Louisiana by 1860, and remained there for the duration of his life. His descendants went to Arkansas, many of them, and some continued to Texas. Our new cousin is named Bill and lives in California. To protect his privacy a bit I'll call him California Bill to distinguish him from Pennsylvania Bill. There is little chance we would have found his branch without the DNA result. Now that we have it, maybe it's time to take another look at those 1850 and 1860 census indexes to see if there are any more Hawk men born in Georgia prior to 1840.

Mode and mutations - Another exciting aspect of this new find is that it throws some contrast onto mine and Pennsylvania Bill's results. The chart above has Pennsylvania Bill in the center, with my result above and California Bill below. Visually, it's easy to see that the Pennsylvania line serves best as our "mode" or baseline. My Georgia line (and by extension, all of the lines in the Georgia/Alabama project) differs by one repeat at two markers, for a total genetic distance or GD of 2. The California line differs by one repeat on one marker for a total GD of 1 from Pennsylvania Bill, but is a GD of 3 from me. The markers that we three differ on, DYS 576 and 570 and CDYa, are known as "fast" markers; they add and drop repeats quickly as generations go by. According to Family Tree DNA, "Very few people achieve this close level of a match."

(Note, the 12 marker result in the top line above is from, I believe, one of the Walton County lines. I accidentally snarfed it into the chart. It is undoubtedly connected to us, but doesn't figure in the discussion on this page.)

So what more can we say? I'm tempted to speculate further, but right now it's time to dive back into the records and see what more we can learn. I'm really just tickled to see our tree growing.