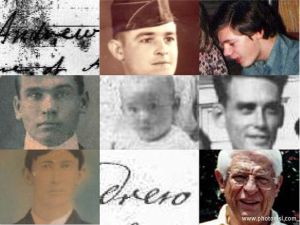 Summary - In 2006 I established the Hawk Surname DNA project at DNA Heritage for the purpose of determining whether a number of Hawk lines of Georgia and Alabama were related. Besides myself, four other men with the Hawk surname provided their DNA samples to the project. Each participant also footed his own bill at a cost of $179 per test, a point I make to emphasize the commitment of the project members in researching our Hawk heritage. We did not know exactly what to expect from the results. My own research led me to the belief that all these lines, and one other we were unable to test (Randolph County Hawk/Hawke line), were close kin. Other people had come to the same conclusion in earlier decades, but we had no rock solid records on which to build the connection. DNA testing bypasses the records and goes straight to the 'genes' in 'genealogy.'

The DNA test - The test we used was a 43 marker test on the Y chromosome. The DNA testing lab counts the short tandem repeats (STRs) it finds in each of those 43 locations. My son is a drummer so let me use that as an analogy. Think of our patriarch Andrew Hawk as a master drummer and his Y chromosome as his masterwork, his vinyl record (or mixtape, as my son would say). It is a complex musical score of different drumbeats, timbre, rhythm, color, tone, volume. He teaches that mixtape to each of his sons, and each son teaches it in turn to his own sons, and so it goes down the line to the present day, where we now sample each descendant's score in 43 places. You know that sons will be sons and we're all going to do a little inventing on our own, so a little variation in the master score is expected. The 43 locations we're checking have been carefully chosen to be helpful in a recent genealogical way. If our mixtapes are very different, you know the original drummer was different somewhere up the line. If our mixtapes are very similar, you know we all learned from the same original drummer. 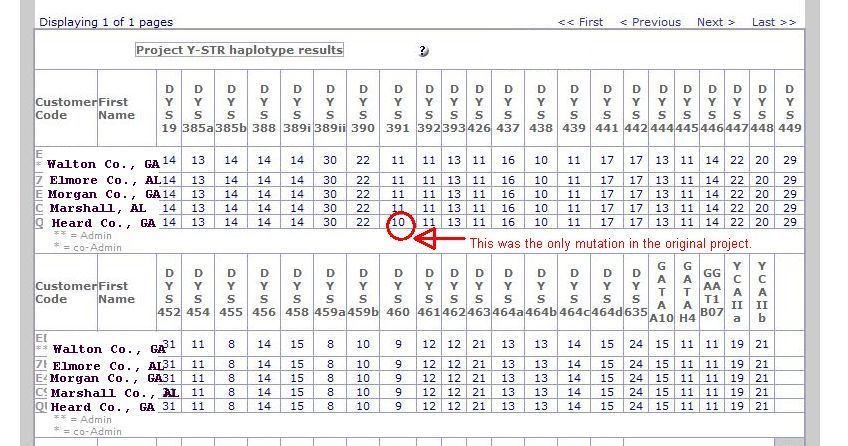 The results - As you see in the graphic, every result came back identical on all 43 markers except for one result that differed by one repeat on one marker. These results confirmed that all these Hawk lines descend from the same individual, and we have enough in the way of records to know that individual must be Andrew Hawk, a man who farmed near Augusta, Georgia, in 1789. The single mutation on the Heard County line was something I had hoped to see on each of these lines: a slight difference, an extra paradiddle or one less beat, that would 'mark' each line, so that maybe, someday, we could associate that line with one of Andrew's sons. Perhaps more sophisticated DNA testing can provide that for us in the future.

Genealogies linked - To put all this another way, genetic samples have linked the James M. and Daniel Hawk families of Heard and Troup counties, Georgia, and Coosa and Elmore counties, Alabama, researched by Hilda Driver Hawk in her book The Hawk Family: James Hawk and Descendants & Related Families, the Thurmond and Hillsman Hawk lineages of Walton and Morgan counties, Georgia, developed by James Bertram Hawk in his unpublished work, and the Hawk lineages and memories of Marshall County, Alabama, preserved by Julia Hawk Raines in her James Madison Hawk family newsletters.

Surprises - Following the success of our small project which was so narrowly focused on these Georgia and Alabama lines, we have since had some pleasant surprises. Click on the link to continue to the next page and our greatest discovery.