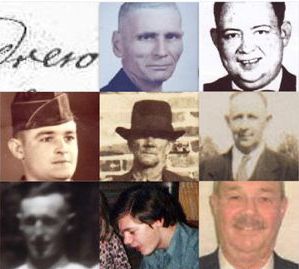 Executive Summary - My name is Victor Hawk. My father was born in Walton County, Georgia, and all the family I knew lived in and around the area of Walton, Newton, Morgan, and Jasper counties. Dad died in 1990. Eight years later in 1998 I became interested in genealogy; he wasn't around, so I had to do my own digging. Years of work in the paper trails led me back to a man named Andrew Hawk, who was one of the early settlers of Augusta, Georgia, after the American Revolution. Andrew was my brick wall, so I just worked on establishing his descendancy as fully and completely as I could. While I was doing that I discovered the work of a man named Doug Mumma, who was using Y-DNA to compile a Mumma tree. Mumma was an early adopter of DNA genealogy and his method and results gave me a way to test my conjectured Andrew Hawk descendancy.

In 2006 I established a Hawk Y-DNA project at DNA Heritage, a reputable DNA testing company headed by Alastair Greenshields, to test whether I was on the right track. Five men of different Hawk lines around Georgia and Alabama did spit cups and cheek swabs to provide DNA for analysis. The results confirmed our connection. It was clear that Andrew Hawk was our progenitor. DNA Heritage was soon driven out of business by the aggressive marketing of their competitors, primarily Family Tree DNA (FTDNA), which became the primary presence in the genetic testing industry. It was not an issue for our project however since we had all the genetic analysis data in our possession. At that point the Andrew Hawk project became a virtual one. I have it on a spreadsheet and here on this site. It ultimately doesn't matter what company does the testing or analysis; we can compile that data together here. Once I had my own genetic results, I uploaded the dataset to various public databases in search of further matches. The Andrew Hawk had been confirmed, but he was still our brick wall -- until another matching DNA sample appeared out of the blue.

That DNA sample belonged to Pennslyvania resident Bill Hawk, a long genealogist who had been searching for other Pennsylvania Hawk cousins for years. Bill's work took us back to Andreas Haack, and we've been collaborating ever since to find other Andreas Haack descendants. I've gone from calling this the Andrew Hawk Project to the Andreas Haack Project. The project itself basically resides on this page and in the database I keep. Although originally I set up an official Hawk surname project at DNA Heritage, that company has since ceased operations. It's not a problem, though, since I have all the project results data - and that is what you see here on this page. My caretaking role is now more virtual than real. Most of us are now with FamilyTreeDNA (FTDNA) where the 67 marker YDNA test is the standard.

Technical Data and Further background - The following pages once served as my DNA gateway pages, and they will explain the historical and technical context of our project.

Origins and evolution of the Hawk DNA project